CR: Tell us about yourself, your background, and your Wang Rou 网肉 moniker.
TRT: My name is 陈睿达. I was born in Kuala Lumpur and trained and worked as a motion graphic designer before going to art school.

I do a browser performance series where I talk into a mic while projecting my actions – clicking through tabs of my emails, YouTube videos, and screenshots repurposed for the story. There is an ongoing narrative that develops each time I perform. Wang Rou is a username I have adopted to frame certain tangents of online activity as part of this project.

Where I last left off in the narrative, I outlined a paranoid narrative about Wang's every move being watched by a hacker, causing him to develop Stockholm syndrome in relation to their watchful eye keeping him psychologically captive. Wang Rou harbors hopes that this other entity, the hacker, will put together the sum total of his gestures and understand him better than he does. Within this story, the live browser performance becomes a way of acting for the hacker in public, hoping someone in the audience is the hacker and will reveal themselves to Wang Rou.

Wang Rou in Chinese means "Internet Meat", and in this sense I am cannibalizing traces of my own identity online.

CR: How did your practice as an internet performing artist develop?
TRT: I started off thinking about performance structurally - that is to say, performance as the conversion of subjective experience to objective data. I got to thinking of two performance pieces by Dan Graham (Performance/ Audience/ Mirror and Past Future Split Attention) as analogues for the experience of self-apprehension when you use social media. In the reification of identity it's easy for structure - the mythology of the thing, to take primacy. It pays to realize it doesn't make sense and stop every time you fool yourself into thinking there is a structure.

CR: What excites you about this medium?
TRT: The possibility of creating new experiences through chance encounters. The development of comedy over the internet is particularly interesting – it's where shifts in affect becomes the most apparent! A lot of humour these days don't so much revolve around jokes, but have become tonal and impressionistic. 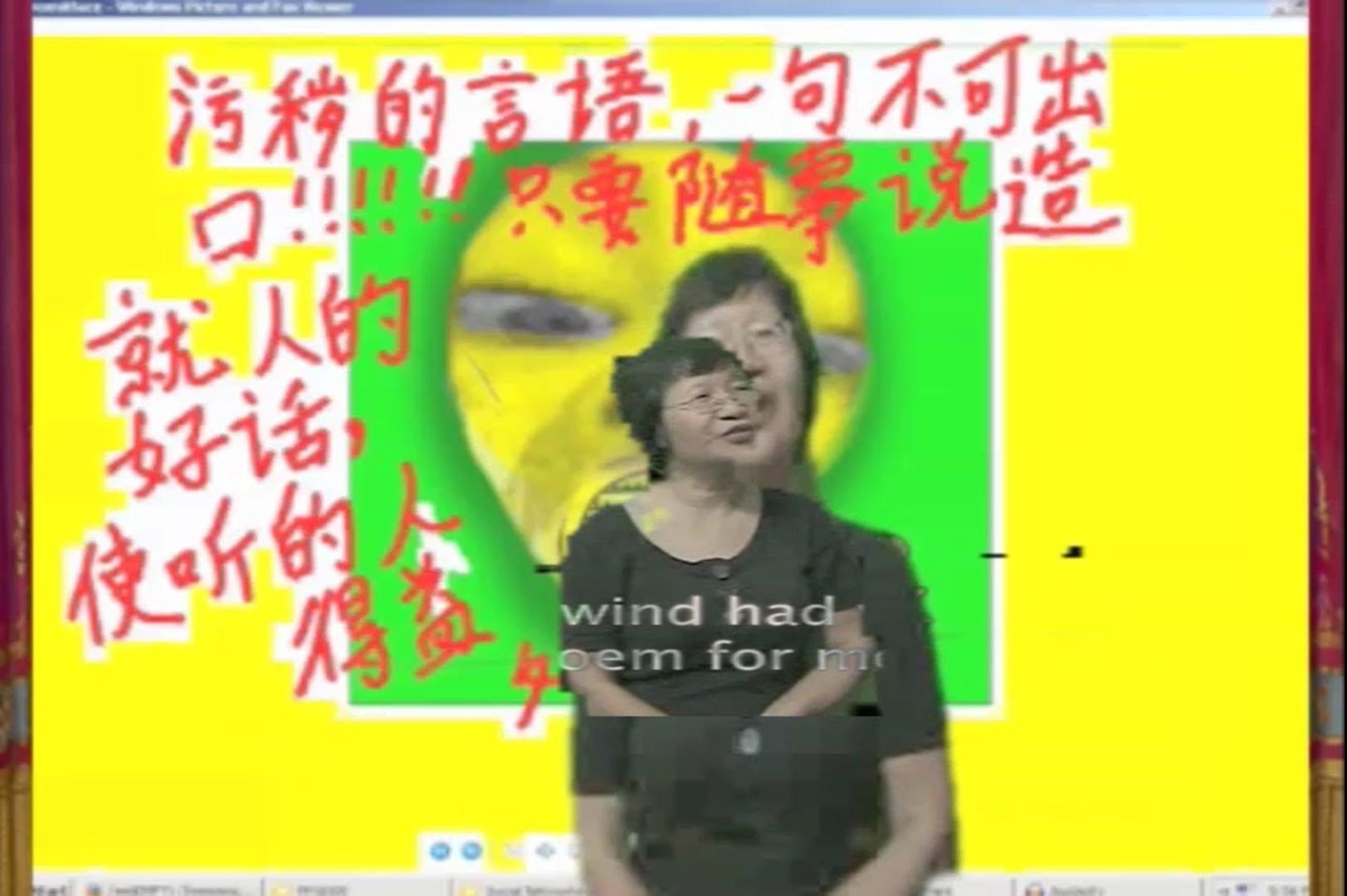 Wang Rou's mom recites a poem. "Do not use abusive language, only constructive, positive words!" 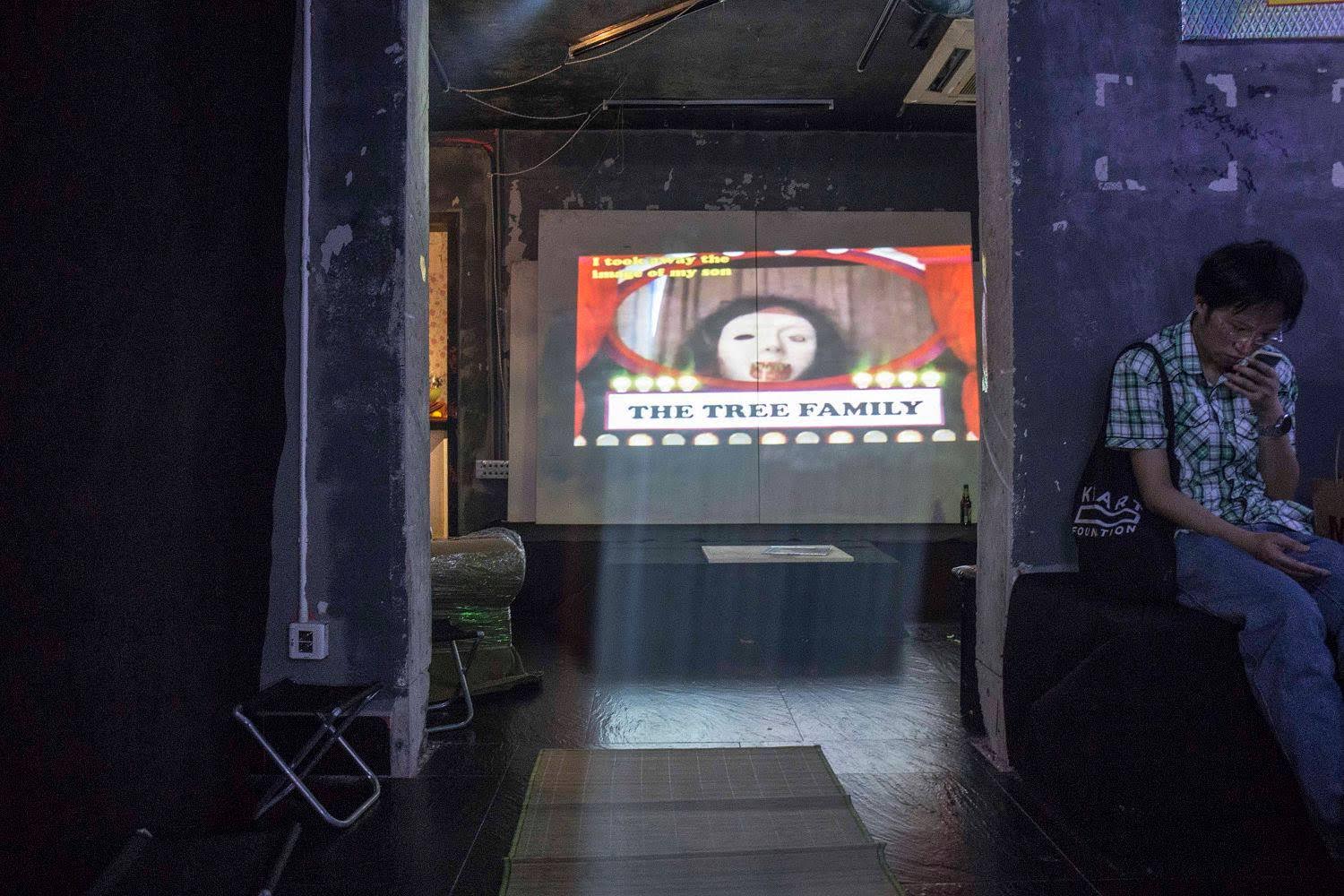 CR: Can you tell us about some themes explored in your work?

TRT: Themes I seem to be revisiting a lot lately is information, subjectivity, and ideology – I realize that these are broad strokes - perhaps I think about the internet itself thematically rather than doing any actual research! This comes from not adopting enough distance from the internet while using it.

CR: What sparked your interest in China?
TRT: Like many other Asians experiencing diaspora I has the desire to re-discover my roots. This is a work in progress.

CR: How did you find out about Basement6?
TRT: I curated a show last year called Circle Jerks revolving around performance and online texts, which included work by Katy Roseland, one of the founders of Basement6 collective. She attended the exhibition opening and gave a talk on her practice and the mobile internet in China. During this time, another member of Basement6 collective, Bryan Fisher, was passing through South East Asia as well. The exhibiting gallery was gracious enough to host both of them and as a result of this established guanxi I was introduced to their world. 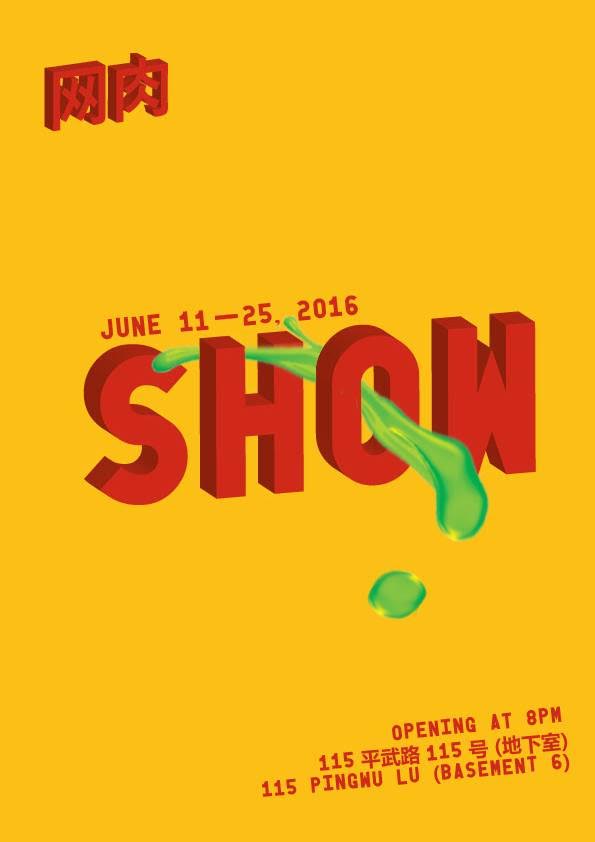 CR: Tell us a bit about the project(s) you worked on while you were at Basement6.
TRT: I mostly consolidated previous works. For the work I produced for my solo exhibition I accumulated material that I developed over the course of 4 years after re-appropriating the awful graphics and animation I had made for my former job at a production studio. With this material I created my own show in 2013, accumulating interactions and data via relationships developed online.

There is a shifting self-referentiality that ties this project together – when it was originally published on youtube I strung sequences together using youtube annotations, which I would change every now and then, re-contextualizing the material in tangent with my pooling of online reactions to the show, later appropriated into the fabric of the videos. 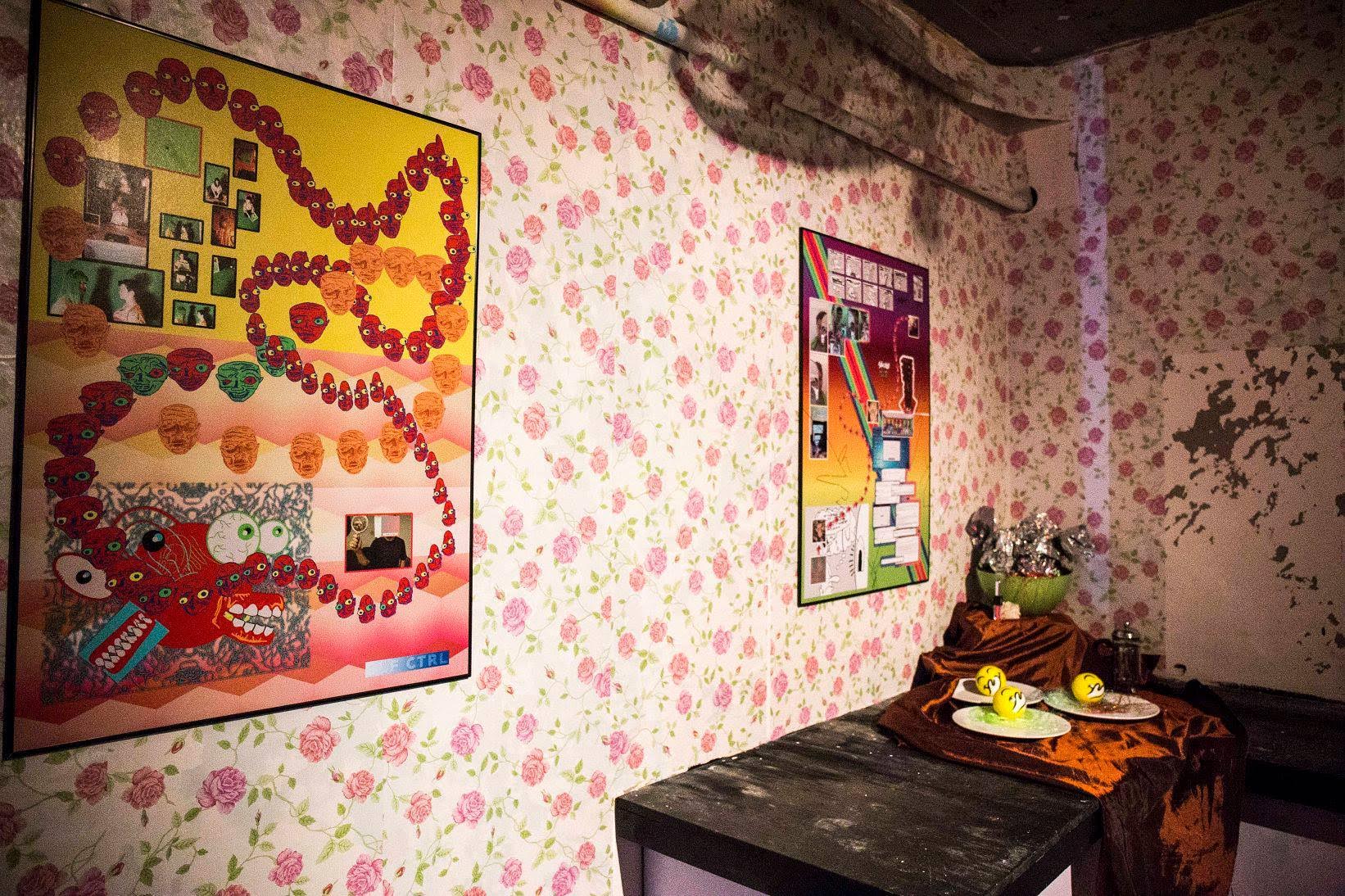 TRT: I expected more structure and didn't quite expect things to be so self-directed and as a result I didn't start immersing in the space itself so much as the lives of people in my periphery. I shot some new footage of people which ended up in the video works created. There were lots of miscommunications in the process and things worked better when I had no expectations.

CR: Did your residency culminate in a talk, a performance, or agreements towards future collaboration?
TRT: Not yet, it did culminate in another show in Malaysia using the same guidelines for installation and performance parameters. Certain points of reference have been established in the direction of certain discussions in the future.

CR: Did your work or practice change significantly from your time in China?
TRT: I don't think I thought too hard of my practice before. I think I became more aware of tendencies through this residency because I was essentially in a new environment working with new people. 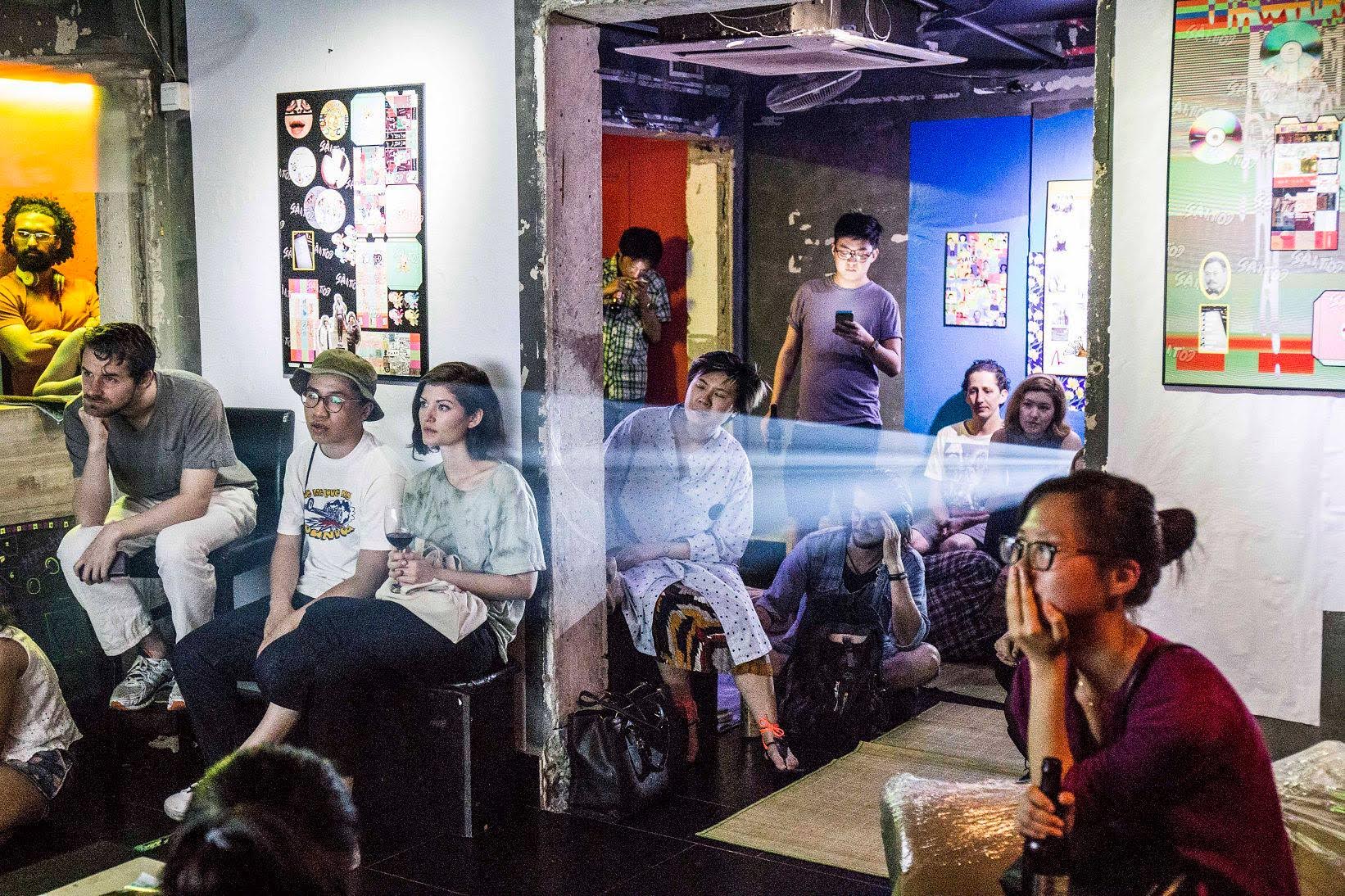 The first live screening of the SHOW episodes

CR: Tell us about some collaborators you met through this experience. How did you find the perspectives of other local artists working with the internet and performance to be different than yours, or from the international scene?

TRT: I feel that those who identify with an international scene, or a 'global contemporary', myself included – have a kind of questionable attitude towards difference – an inauthentic gesture of splitting up the same old tired relations so they can stake claim to diversity. They can accommodate differences but its on certain terms. I feel complicit in this whenever I talk to local artists. They have gotten me thinking of lineage and tradition as being more important that this flattened terrain of liberal diversification.

CR: It seems like you work a lot with other galleries and spaces, both physical and digital, all over the world. Can you tell us a bit more about how it’s been working on these international collaborations while in Shanghai?
TRT: I'm still learning through trial and error – what's more important to me at this point is a space for reflection in regards to these working relationships in the context of the gallery as an extension of a network of interactions, rather than the end goal.

I owe a lot of learning curves to one gallery back home, Minut Init Art Social – last year I was curating people abroad within that space so things have come full circle. While in Shanghai, I more or less delegated an entire solo show to the gallery assistant and curator Abraham Stein, who worked tirelessly to fulfill my ideas and deserves some credit for his dedication.

CR: You’re currently still in Shanghai. What makes you want to keep working there? What sort of projects or themes are you continuing to explore?
TRT: Critical mass. I'm a bit of a dilettante and have benefitted from the range of jobs trickling down from culture industries here. As of this writing this my soon-to-be employers are processing my work visa, and once I've settled into that routine I would like to focus on research as opposed to production. Being here is more about getting out of my comfort zone than any overarching strategy I have with my art practice.

CR: What is Shanghai like as a city?
TRT: It's hectic and everyone goes hard. The wealth divide translates to a certain harshness in people's attitudes here.

CR: Had you been to China before? If yes, to what parts of China and for how long?
TRT: I had not been to China before the residency and have not ventured out of Shanghai since, save a trip to Suzhou. I really loved the canals at the old part of the city there.

CR: Did you speak any Chinese before coming? If not, have you learned any since then?
TRT: Yes I speak fluent Mandarin. Something I used as a point of reference in the work I produced during my residency is that between my Mom, dad, and I, we speak Hokkien, Mandarin and English, and my Dad doesn't speak Mandarin, my Mom doesn't speak English and I don't speak Hokkien.

I'm trying to figure out Shanghainese.

CR: Did China fit your expectations? Do you feel you a significant cultural or linguistic barrier?
TRT: I came here with little or no expectations – I feel it's been a slow burn unlearning what I take for granted as trappings of an asian city. Centralized internet is something I couldn't adapt to.

This interview was conducted over e-mail on September 13 2016 by Fei Liu for China Residencies.