Emma Karasz has been running Red Gate Residency in Beijing for almost two years, taking over after previous director Tang Zehui left to become an independent curator. After studying Chinese and working in publishing, Emma dedicated herself to fostering successful projects with artists from all around the world, and took some time to answer a few questions about Red Gate:

China Residencies: What first got you interested in China?

Emma Karasz: I first came to China when I was 15 and was totally perplexed by the place; in other words, I didn’t really like it but felt that I wasn’t ‘getting’ something and wanted to come back. My curiosity brought me back when I was a junior in college and again after I graduated in 2012. I haven’t left since.

CR: How did you hear about Red Gate?

EK: The summer before I started working here, I met a resident, Tom Railton, through a friend who was here by way of Red Mansion Foundation (one of the residency's partner organizations) who told me a bit about the program.

CR: What interested you about the residency coordinator job?

EK: I was looking for something new and I knew I wanted to stay in a position broadly under the umbrella of ‘cultural exchange’. I’d begun to explore the art world in Beijing and was totally taken with the range of things I was seeing but was not so interested in working in a gallery.

CR: You’re now the director, in charge of almost every aspect of the residency. You select the artists, welcome and orient them, organize open studio exhibitions and much more. What’s a typical day or week like?

EK: I make my own schedule and I can work from anywhere: home, the gallery, or a studio in Feijiacun! During a typical week, I try to catch up on emails from artists who are preparing to come for a residency, artists who have left, and artists who are interested in the residency. I hang out with the current artists-in-residence and see what they’re up to, check in with Brian [Wallace, Red Gate Gallery's founder & director], prepare an upcoming activity for residents, go see some art in Beijing with the residents, and make sure that all is working in our 9 facilities. Occasionally we have visitors and tour the residency with them. 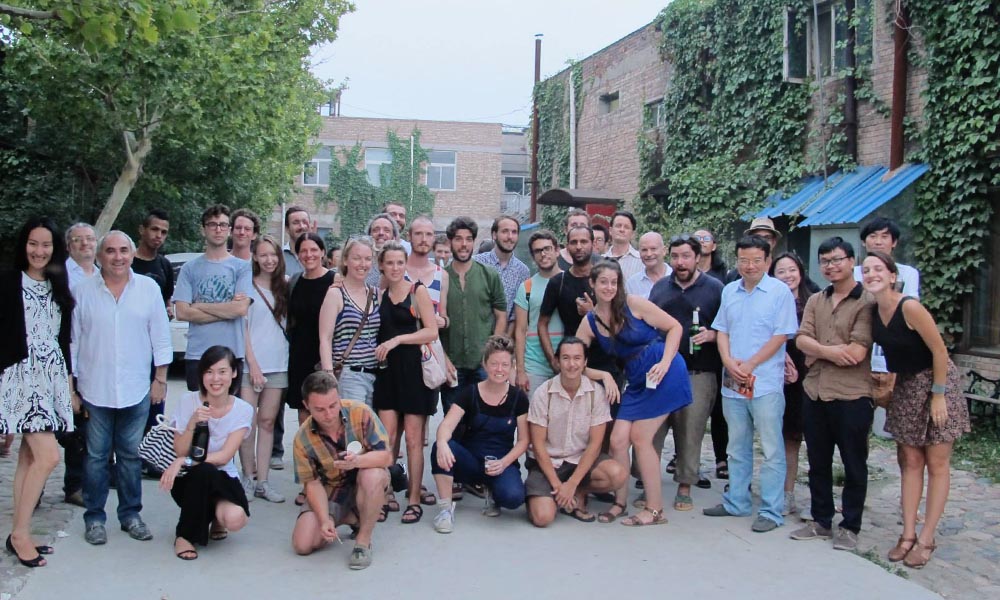 CR: What do you look for in choosing artists? Is there any type of work you’d like to see more of?

EK: It’s very simple. We look for a compelling and feasible project plan and an interest in China specifically. Everyone has different goals when coming for the residency, but it is important to me that the place itself matters. I would love to see more performance work. I’d also love to have more collectives, which is why I’m really looking forward to the next edition of the Crystal Ruth Bell Residency!

CR: What do you think is the ideal length of stay for an artist?

EK: Three-month residencies are ideal. We started recommending this length in acceptance letters, since we see over and over again that this produces the best results. When considering a residency in Beijing, it is important to take into account the time that it takes for settling in, some socializing, discovering that you probably will not stick to your original plan and will instead do something totally different, and then of course the time that it takes to actually create what you want.

CR: What kinds of people make the most out of their time at Red Gate?

EK: People who are flexible, love to explore, and are not too put off by the language barrier.

CR: Do you recommend artists learn any Chinese before coming?

EK: It’s not crucial, but a little bit of every-day Chinese will help alleviate some stress. Things like numbers, pleasantries, and food vocabulary—just the basic stuff. That said, most residents who do not speak any Chinese come up with own systems for communication, and those always prove to be very useful.

CR: Do you find that artists arrive with a lot of pre-conceived ideas or expectations about China?

EK: Absolutely. Part of the reason that I am passionate about this job is that I want to to be a part of the deconstruction process of preconceived notions and expectations.  China is constantly in the news, and yet so much of it remains a total mystery to so many. There will always be mystery of course (for me too), but part of the point is to get people here to see that cross-communication is totally possible, especially through art.

CR: Red Gate Residency usually hosts between 6 and 14 artists at a time. Tell us a little about how the different groups of artists get along and create a temporary community around the residency.

EK: Group dynamics are always changing at Red Gate Residency—it’s part of what makes the job interesting. It can be a little bit like the first weeks of summer camp at the beginning of each cycle of residents. Residents sometimes fall into archetypes within the group: there’s the mother hen, the loner, the cynic, the know-it-all, the wild card, etc. It’s great! Someday I’ll write a play about all these personalities.

We have found that it’s good to have a few artists each month who have been around for at least one month so that they can pass on their knowledge to the newbies, since they’ll always know more than I do after actually living in the studios for the month and experiencing everything for the first time. Feijiacun (the village where the studios are), and even downtown Beijing, are in a constant state of flux and so it can be hard to keep track of where everything is.

CR: You organize open studios every month, how do you go about setting up these events?

EK: We generally do not curate the open studios much. We have had a few curated off-site exhibitions, but we try to keep the Open Studio as relaxed as possible, largely because of the different stages that all the residents are in.  When the open studios roll around at the end of a given month, some residents will have just started making work and others will have very finished works, ready for a gallery space. A previous resident criticized this aspect of the open studio exhibition, and suggested that we make the open studios a more formal event, and invite a curator or a curator-in-residence plan the show a bit more. This is something that I think could be really fun, but we haven’t gotten around to trying it yet.

CR: You do a great job documenting the residents’ project on the Red Gate tumblr and Facebok page, including linking to the many artists who write about their experiences there. What are a few of the projects you found most interesting so far?

EK: I have been inspired by so many projects carried out by the residents at Red Gate over the last year and a half. Off the top of my head: Susan Fang’s (resident in February 2015) project ‘‘SuZhi’’ was really fascinating to me. She made clothes out of rice paper and ink and hung them around the village of Feijiacun. I love when projects are place and site-specific—it shows that residents are really interacting with the environment. 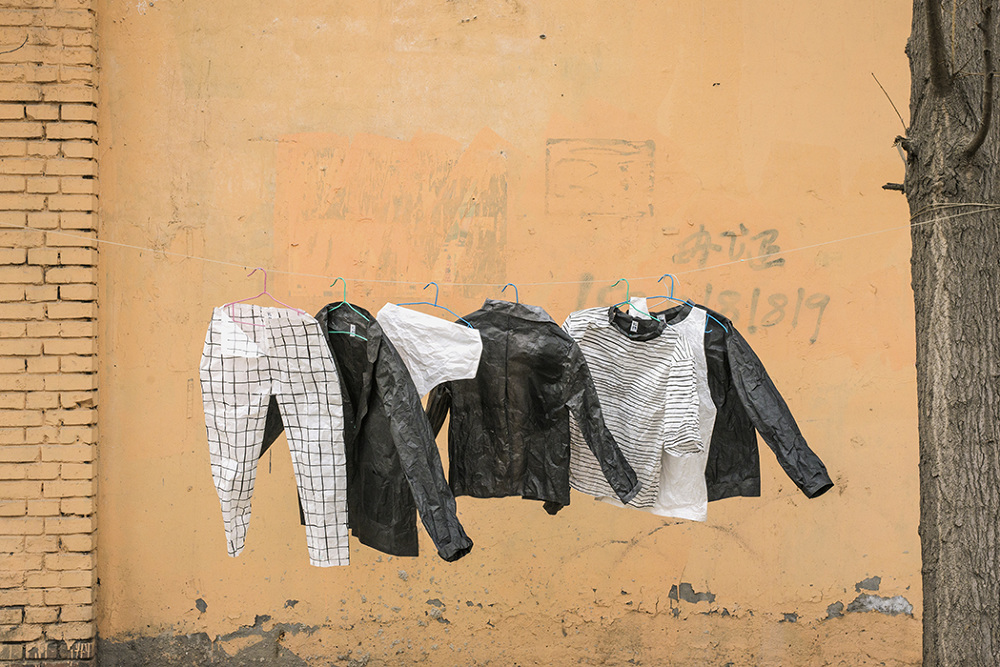 Photo-documentation of clothes constructed from rice paper and ink, hung amongst real clothes in the village of Feijiacun, Beijing. (Photographed by Stewart Ziff)

Suzhi/素质 is a vague Chinese term. It is generally used to describe good personal character. But replace the word zhi/质 with the word for "paper", zhǐ/纸, and the term becomes simply, "plain paper. - Susan Fang

Adam Tylicki (resident in November 2014) made a great video work about the culture of buying and selling art.  For one scene, he went to the local recycling yard in Feijiacun, bought a piece of ‘rubbish’ (which may have been a compressed chandelier), and then had a fairly well-known artist, Red Gate artist Guan Wei, sell it back to another recycling yard, while still maintaining that it was ‘art’.  Adam did this a few times in Beijing with different artists, and in a few different cities. The outcome is a video with funny and somewhat confusing scenes in rubbish yards in Beijing, and that reminder that the way in which we value art can be a somewhat meaningless.

Jagrut Raval’s (resident in Dec ‘14-Feb 2015) work has been referenced many times on China Residencies at this point, but I do want to mention his ‘Consuming the World’ project. Jagrut wrote his application with this project in mind, and we spent a lot of time discussing various ways to carry it out after he arrived. I was glad to be a part of the final product. The project allowed for us to consider basic truths about ourselves and everyone else, most simply that we all live in this world and we all eat food.

During her residency in Beijing, Alexa Wilson, (resident in March 2015) finished Extraordinary Alien, an experimental documentary. The film is composed of footage of performance art done around the world by Alexa herself and other artists, layered with soundclips of interviews Alexa did with people who have left their home countries and settled somewhere else. The mixing of the images and the sound recordings is very powerful, and made me realize a lot of things about my choice to live abroad that I had never really considered before.

CR: You’re also involved in a few other projects in the Beijing art scene, like the zine Concrete Flux. Tell us more about what you’re up to:

EK: Concrete Flux 流泥 is an online and print multi-media, multi-disciplinary, and bilingual journal. It was started in Beijing a couple of years ago by two friends, Solveig Suess and Tom Baxter, who wanted to create a platform for discussing all the vast changes that are happening in China, specifically in the context of the city. The two of them ran it for a while, but a lot of people got interested in the project, and it became a lot of work for just two people. 6 months ago we formed a collective to run the journal, and we’re made up of 7 people from all over the world, working in different disciplines. It will likely be a biannual magazine, but we plan to develop Concrete Flux as a platform for discussion about these kinds of changes and issues. We just closed our call for submissions for Issue IV: Suzhi. Keep an eye out for it!

CR: What does Red Gate Residency have in store for 2015?

EK: As you know, we have hosted the first Crystal Ruth Bell resident, and initiated a ‘Chinese Young Artist’ residency, which calls for Chinese artists under the age of 35 and living outside of Beijing to come and live for a month in one of the residency facilities. We had our first resident last month, Chan Wei, from Shanghai, and we were really happy with the outcome. We’ll be welcoming Chihung Liao, installation designer, from Taiwan in May.

I’m also really excited because in partnership with Videobrasil, one member of the staff at Red Gate Residency has been invited to Brazil in October to attend the Videobrasil Contemporary Art Festival and join the Residency Network Committee to help choose an artist for the 2016 VB/RGR residency.

All images courtesy of the artists.