We spoke with Ditmar Hoerl, an artist and glass maker who was one of the first residency program participants during the summer of 2018 and the Coldshop & Fusing studio technician at the YZ Creative Art Center.

China Residencies: How did you hear about the residency?

Ditmar Hoerl: It went pretty much by coincidence. I was a teaching assistant at Pilchuck Glass School, one of the leading places for glass in the world. In 2014, my instructor was invited to Taipei, Taiwan, to head a project and invited me to be part of a team for some stainless steel and glass casting work. Winding forward, the person, Claudio Chen (who was a project manager in Taiwan) ended up being the lead architect at YZ projects.

As we really enjoyed our time and our project in Taiwan, my instructor was asked if we wanted to spend some time on a project in mainland China. I was invited to be part of the team again, and naturally said yes! It was the best decision. I have been pretty impressed by the nature and landscape of a less "westernized" China, compared to Taipei, and the scope of the project at YZ Creative Art Space.

CR: What was your first impression when you arrived at the residency?

DH: I arrived at the closest city, Taiyuan, a few days before going out into the “country”, where the YZ Creative Art Center is located. On the first day, I felt pretty much foreign, as one would expect to be in a new place. From the second day onwards, I already felt at home, in a comfortable way. Taking part in everyday life and interacting with people made my stay very enjoyable.

CR: And what were your first impressions when you arrived at Yuzhu lake?

DH: YZ is a 2 hours drive south from Taiyaun. Being at Yuzhu lake feels like being in complete nature. It gives a real Chinese flavor, without having tourists around. Yushe, the closest city, is a comparatively small industrial city. Getting out of a major city and being immersed into nature felt so refreshing for me.

There were no tourist attractions designed for foreigners at all, and some people we met had seen few Caucasians -- some small children had never seen any [white people]. We literally stopped traffic, and would wave to people and say hello.. 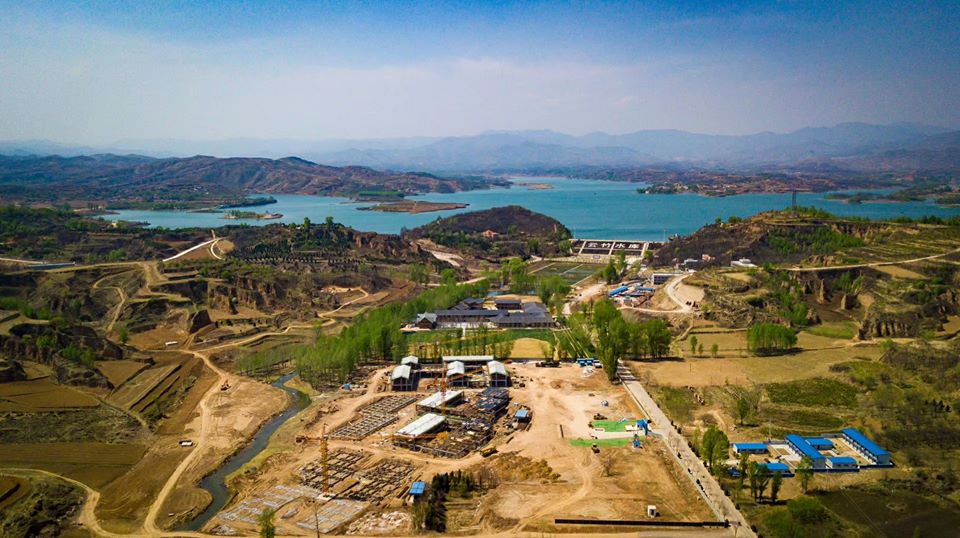 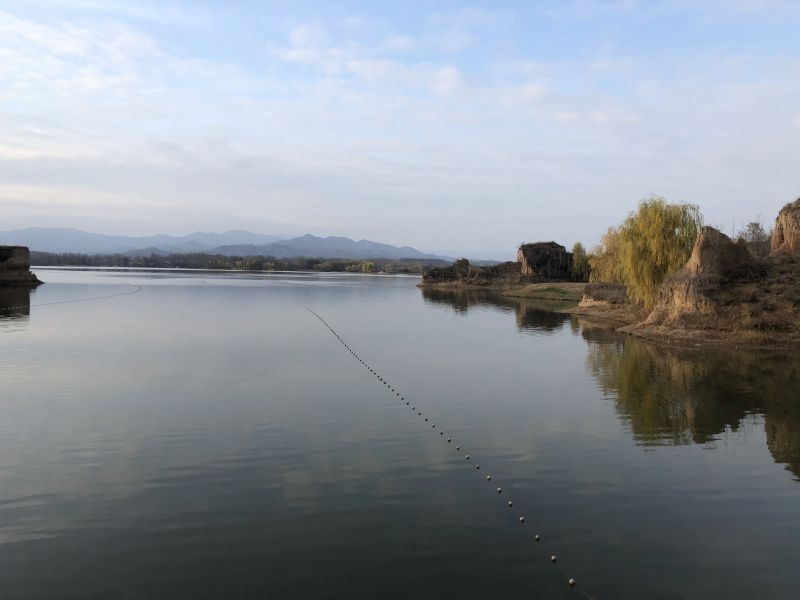 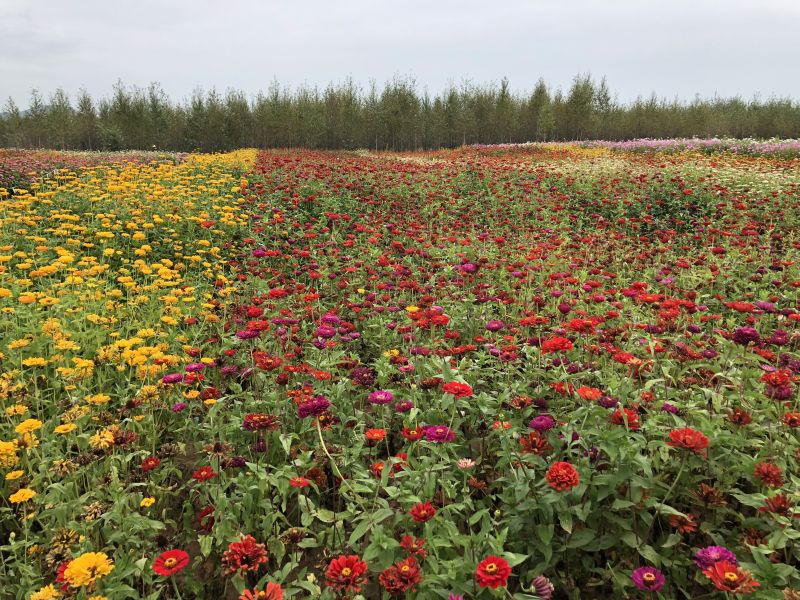 The surroundings of the YZ residency.

CR: Can you tell us a bit about the project you worked on while you were there?

DH: On my first trip, there were four of us there, working on a design project for the North and South entrances to the resort complex. My design responsibility was for the main north entrance, North Gate, to the huge facilities of the YZ Creative Art Center. It was a large outdoor sculpture, around 28ft. high and 150 ft. long, spanning a roadway. The second time I went back I was working primarily with the glass facility.

During my time in China I had the opportunity to travel to Xinjiang province, Urumqi and Kashgar.

The cover photo shows Ditmar Hoerl's sketch for the North Gate during the residency program.

CR: To which extent did this residency differ from your previous working spaces?

DH: To have a little bit of backstory, my involvement in the arts has been over 30 years. It started with being involved in the family business, using industrial materials. After the family business got sold, I started taking formal classes, and exploring all mediums. Working with glass became my first love. For the past 12 years, I have been part of the Maui Arts and Cultural Center [in Hawaii] and as gallery preparator, it has brought me a lot as a creative outlet.

Pilchuck is actually the only other formal residency I have done, I took part in a two-week winter session of glass casting as artist assistant, and then the following year, I was granted my own two week winter residency as an artist.  I was able to exclusively work on my projects, since I had the entire glass casting facility for myself, and there were no classes.

The YZ Creative Art Center itself was a bit different in terms of the facilities. The whole area was still in process of being built, there was still quite a lot of construction going on. Little difficulties came with that along the way. But I have to add: these problems might be the result from building such an immense facility. The scale of it is huge. I have never heard of or seen anything as large as the YZ Creative Art Center. Usually, glass blowing or art studios are connected to a school or similar facility, and naturally come with size limitations. Especially for a privately funded facility, the YZ studio spaces were unique in itself. The main building, the glass facility, we call “the cake” due to its cylinder shape, is 4 stories high and 60 meters in diameter. It was still in process of being finished the last time I was there. 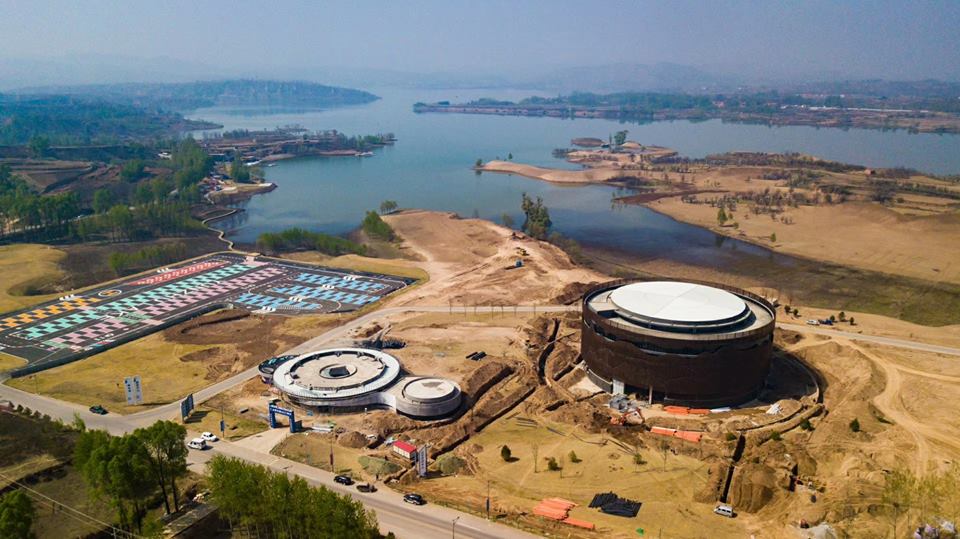 Aerial overview of the YZ Creative Art Center (above) and the glass center (below), also called "the cake".

Another facility, around 3 km away from “the cake” is a large block building complex. With the exception of the ceramic building, each one has 30 ft. high ceilings, complete with gantry cranes on rails for moving large sculptures. There are four separate studios for woodworking, metal, mixed media, and ceramic with mezzanines as well as a YZ office space. The scale of it is mind-blowing for me.

As soon as the design and collaboration were approved by the architects and the people in charge of the YZ studio, as an artist, you essentially had free reign over your project. 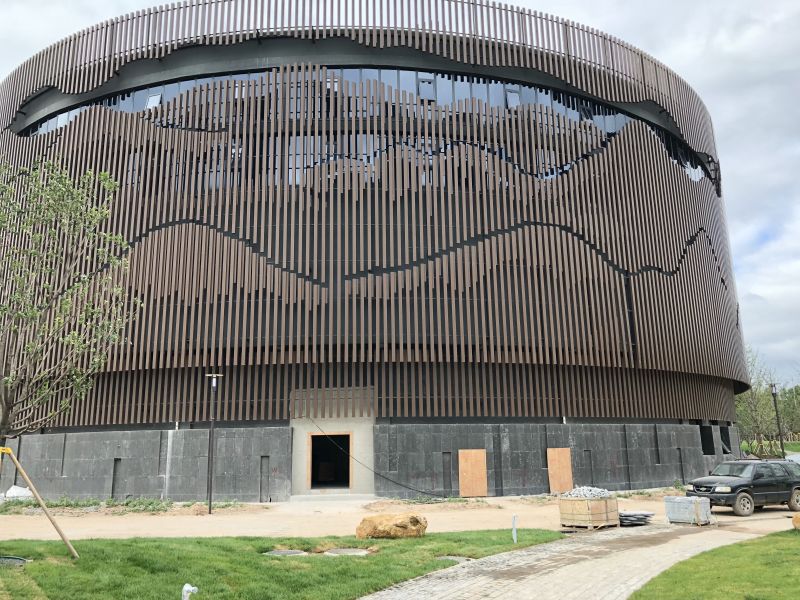 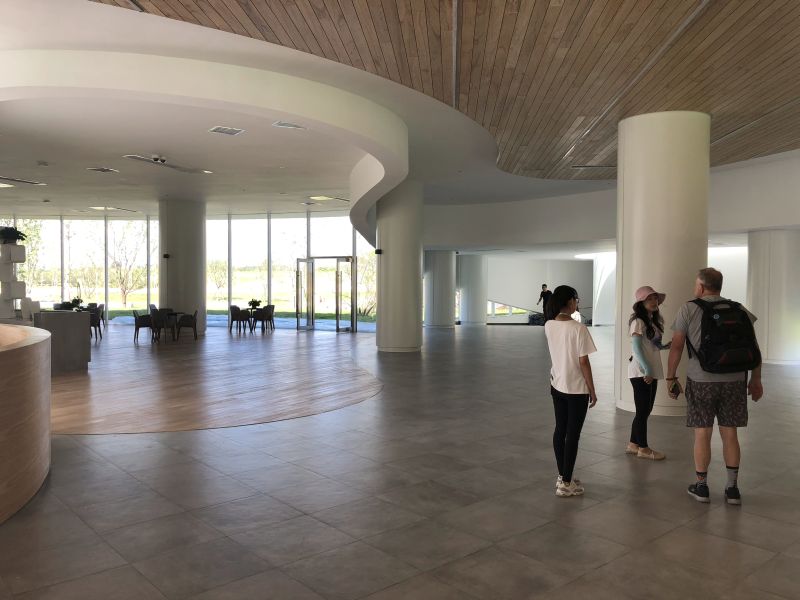 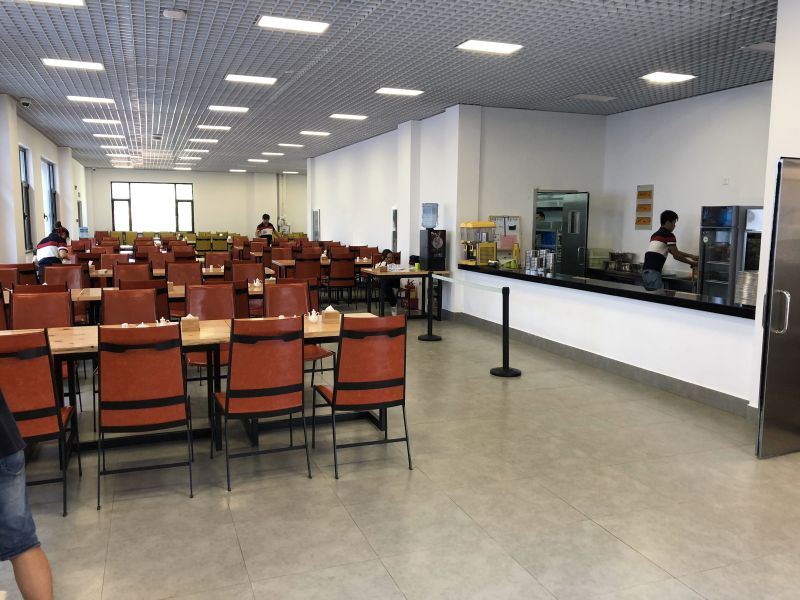 First impressions of the YZ CAC: the cafeteria.

CR: So, how much of YZ is actually a resort, and how much of the facilities are for the artists attending the residency?

DH: The YZ Creative Artist Center is pretty much open to anything. They are trying to start teaching art-making methods. For example, they are investigating planting flowers on their land for natural dye-making classes. Townhouses, condos, hotels are all in the masterplan. A beautiful synthetic turf soccer field, walkways and play areas are already built. A lot is happening. The lead developer is truly an "art aficionado" and wants to involve arts as much as possible into the whole project.

CR: Did you have to share your work with the public? If yes, in what form (exhibition, lecture, workshop, podcast)?

DH: Yes, definitively! The YZ Creative Art Center very much wants to incorporate public events. They want to do classes, making co-teaching possible, and want to include local residents. It also depends on the participating artist themselves, on how much time they have, and on how involved they are in their projects. For me personally, we held a number of sculptural exhibits at the visitor center, adjoining “the cake”. It was actually very well received by both the greater public as well as the county and government officials who visited. They were quite impressed. Several of them experienced “hands on” glass-making during a small workshop.

CR: Which parts of the area are for the resort?

DH: The resort itself surrounds a reservoir, an artificial lake created by a dam. It is shaped to resemble a phoenix, which is good luck in Chinese mythology.

CR: Did collaborations with the other artists occur during your time at the residency?

DH: Another artists there, Kat Cowan, was there with her husband, Rich. Originally from Hawai'i, now living in New Zealand, she was working on glass and mosaic in addition to teaching. There was room for collaboration, and in the future, I definitely want to pursue it. Opportunities will depend on individual situations.

CR: Did the residency meet your expectations?

DH: My expectations initially were all based on a much smaller scale. When I heard that they were building studio spaces, it was never expected them to be at the scale that I saw. Now that I have been there and after participating personally, troubleshooting and giving ideas, it goes beyond anything I may have expected. I need to add that all this is a very new concept. So, in terms of expectations, I was blown away by the potential of the whole project. The size and the possibilities left me overwhelmed. I am looking forward to going back and continuing with anything I can do to help. Currently, my biggest limitation is obtain a working visa for more than three months. 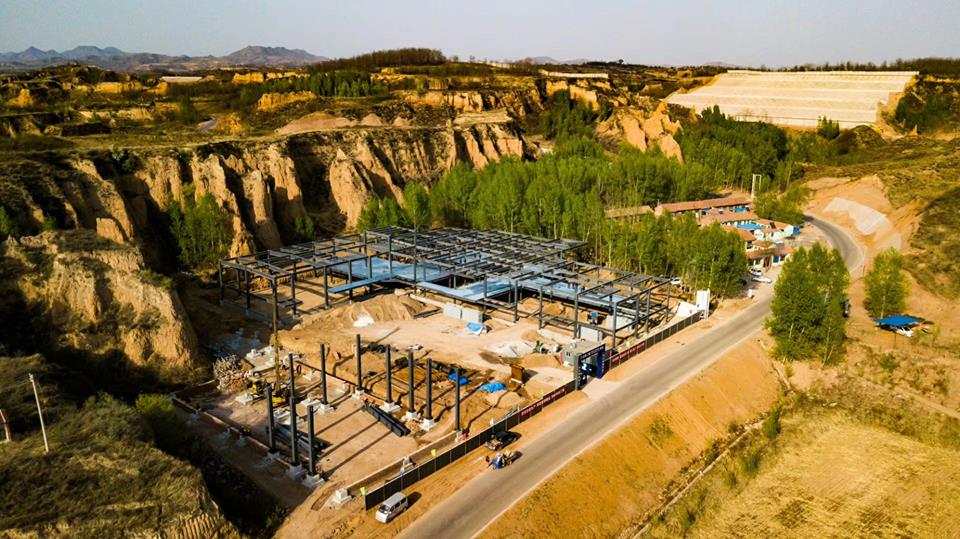 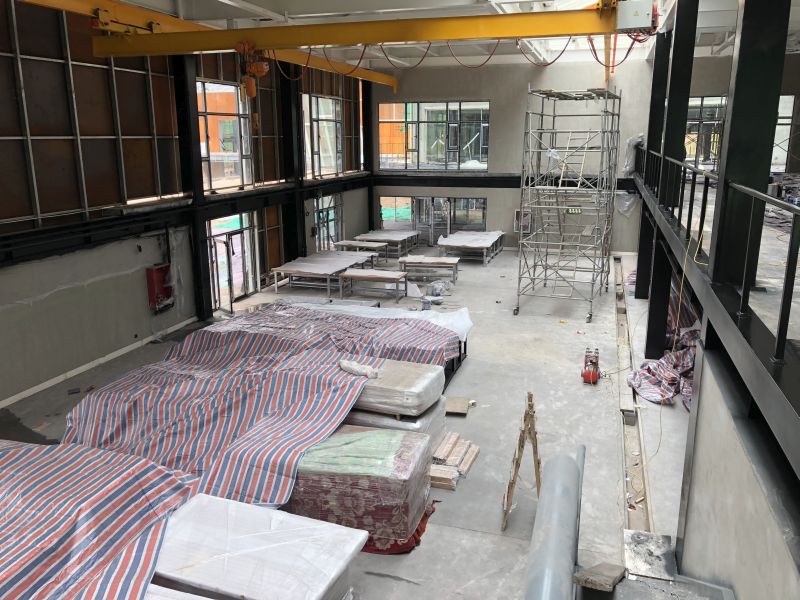 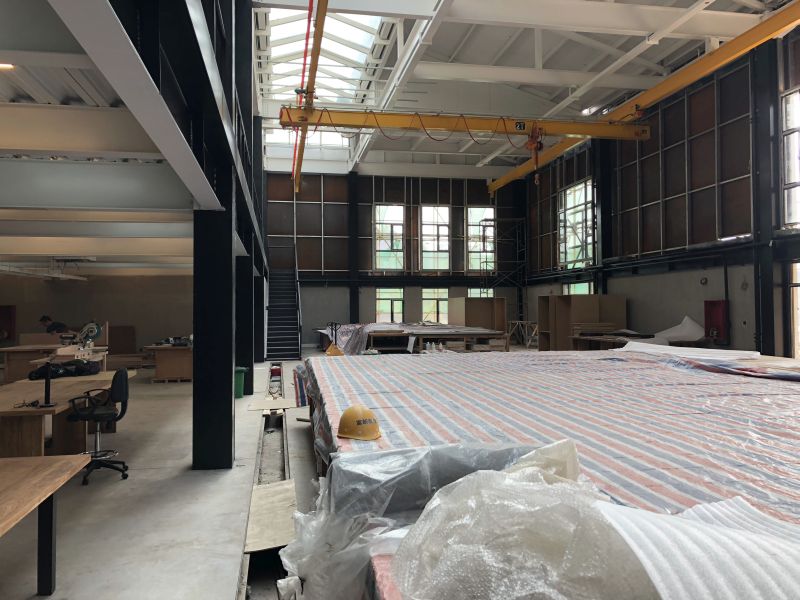 Overview of the wood shop in construction.

CR: Had you been to China before?

DH: Before that project, never. It was my first time in China and I enjoyed it so much that I came back two following times that year. After the initial residency, I returned mid-August and stayed until mid October 2018. During this time, I participated in several works for YZ and some design proposals for public sculpture that YZ will fund for Yushe County.

CR: Did you speak any Chinese before coming? Did you learn some while there?

DH: No, I didn't speak any before coming here. At the YZ Creative Artist Center, it was no problem to speak English, and getting around in China as a whole, was also not that big of a problem. There were quite a number of people who spoke English.

CR: Any ideas on when to go back to China?

DH: Yes, definitively I want to return to China soon.... and return as often as possible.

DH: I want to add that despite how great my time at YZ was, one cannot forget that it is still a growing project. So growing pains exist, as people there have never done or experienced something like this before. Everything is still a growing and learning process. It's just the beginning now, it is all a collaborative process between artists and YZ, working together to make the facilities work properly and efficiently for the future.

The interview was carried out by Xiaoyao Xu via phone and e-mail for China Residencies in January 2019. All photos courtesy of Ditmar Hoerl.