Shanghai is home to many advertising agencies, including the powerhouse firm Wieden + Kennedy. They recently launched W+K+, a co-working space for creatives. We sat down with Thea Baumann after touring the offices to talk about China, tech, and an app that sends holograms shooting out of your nails.

CR: Tell us a bit about your background and how you got interested in China.
TB: I began my creative technology experience working for Media Arts Asia Pacific, one of the first mappers of media arts practices in the Asia Pacific region. I started as a content producer, looking at some of the first waves of net art coming out of Asia. From there, I received the Brisbane Lord Mayor Fellowship to come to China and study Chinese and also connect up with the Chinese artistic and innovations landscape.
I trekked around the Three Gorges, collecting and pressing plants, and from there ended up in Beijing, in a village called Xiangshan, beyond the 6th ring. I was ensconced in the outer rims of Beijing for a year, trying to figure out what I was doing in China, what my art practice was about. I studied Mandarin, as well as Chinese opera makeup.

I went back Australia, and about 4 years later, I caught another Chinese bug and decided to go back to Beijing on a residency. The Department of Foreign Affairs and Trade had a program at the time that was called Imagine Australia, supporting various exchange initiatives with China. I was a resident at Red Gate, and I've I just kept on coming back since 2010.

CR: Do you have advice for other artists looking to explore China?
TB: My immediate advice is to be tenacious and have the guts to do it. It's not easy and there's a lot of things that aren't really transparent, you need to have patience with the layers of communication that exist here. Tenacity is key if you want to come to China.

CR: What brings you to Shanghai this time?
TB: A project called Metaverse Makeovers (MM.)  It's an immersive mobile experience that combines augmented reality, app development, gaming, social networks, and live outcomes. I decided to turn MM into a startup company, and I've come back to launch new 'appcessory' products onto the market. 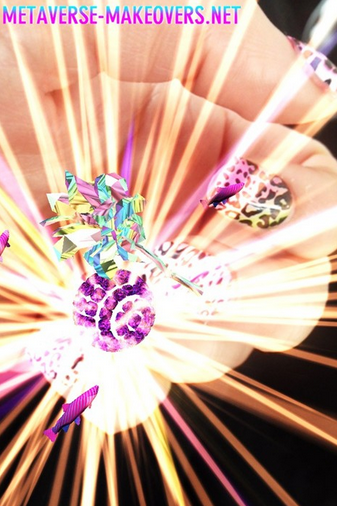 CR: Tell us more about this company.

TB:We design, develop, and commercialize a new type of product: augmented reality appcessories for the female mobile market. They are collectable fashion nails that work in combination with an interactive game app, so when you scan your nails with the MM apps, all kinds of blingy animations fly out of your nails. These sparkly hologram effects can then be shared to social networks and exchanged with friends.

The work has been developed through research and observations in nail bars in Asia and examining how Chinese girls and asian women in general use technology in social spaces like nail salons. I'm interested in using mobile tech to enhance social culture and social networks that exist in real physical spaces.

So I'm back in China to launch our nail appcessories on the market and drop a new hologram trend !

CR: How is it going so far?
TB: It's going well, I'll be soft-launching our first design, leopard print, then submitting the app for the App store and Google Play.

CR: How did you heat about W+K+?
TB: When I first got to Shanghai, I started working from my apartment, in my room. It's a rite of passage for startups to bootstrap. I have a great colleague here, Samantha Culp, who similarly has an interest in new emergent culture in China. I asked around for an office environment to connect me with the Shanghai creative scene because I was very isolated at the time, so she introduced me to this space.

CR: Is there an application process or a program fee?
TB: There is no application and the space is free. There is also no direct dollar value, they don't raise funding for you to undertake projects. MM is completely self funded and raises its own capital for developments.
The program officer, Richard, runs the space and curates the types of creative that he feels are suitable to the nature and style of the office and the agency. Generally, media creatives that are working on the edges of creative practice. It really also depends on what kind of desk space is available. It's a little bit of good timing in terms of getting in there and snagging a space, as well as being aligned to the types of creatives that are being curated into the space.

CR: How many people are working here now?
TB: There's about 20 of us over there and i still am getting to know everyone. I share a desk space a photographer, and I sit opposite a skateboarder who runs a skateboard company, it's a mixed bag.

CR: Is W+K a good work environment?
TB: W+K is a really great open office environment. Just the actual structural layout of the building is really fascinating, I come from a hacker/maker background and I'm heading into a very commercial space so in some ways, the building's layout is really a great reinforcer of this model that I'm exploring within my business and company and practice.

I'm surrounded by really creative types, photographers and creative designers and sound practitioners and people running their own tech startups that don't have an artistic focus. They all have a little more grit and have decided to make a go of it. In some way it's moral support by default, we all kind of know that we're in it together, which is great.

Above us, we have two levels of an advertising agency. At some point, we present some of our work to our colleagues upstairs at W+K, and at some point we would collaborate with the agency to undertake a project which is informed by our own creative practice and would be umbrella'ed by the agency, that's part of the tradeoff of having a great free office space surrounded by creatives.

This interview was conducted in Shanghai by Crystal Ruth Bell for China Residencies.